“ Dr Tom Christie is a Director at Extremis Publishing, with editorial responsibility for the company's full portfolio of titles. ” 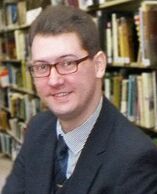 Dr Thomas A. Christie is a Director at Extremis Publishing. He is involved in the editing and document design of all books produced by the company, including close consultation with its catalogue of authors. He is also responsible for the production of video promos, and for presenting a monthly podcast.

He is a Scottish author with research interests in popular culture, literary analysis, interactive fiction and modern cinema. He has many years of experience as a literary professional, working in collaboration with several publishing companies on both sides of the Atlantic including Cambridge Scholars Publishing, Applause Books, Crescent Moon Publishing and Robert Greene Publishing. His full-length works to date have focused upon subjects such as cinema history and literary criticism, as well as the production of original prose fiction.

His work has featured at international venues including at the Centre Pompidou in Paris as part of a major exhibition focusing on the filmography of award-winning director Richard Linklater in December 2019, and in conjunction with the Banco do Brasil Cultural Centre in Rio de Janeiro relating to an extensive exhibition on the life and films of cinematic polymath Mel Brooks in February 2020. He and his books have featured in many publications including The Smithsonian Magazine, The Digital Bits, The Media Education Journal, History Scotland and Retro Gamer, and by broadcasters including Times Radio and BBC Radio Scotland.

A passionate advocate of the written word and literary arts, Tom was elected a Fellow of the Royal Society of Arts in 2018. Fellowship to this learned society is only awarded to those who can demonstrate that they have made significant contributions to social change, progress and development, and who support the RSA's mission to find practical solutions to social challenges. The RSA Fellowship is a community of leaders in the fields of art, literature, journalism and business who have made noteworthy contributions to society, culture or the arts.

Tom is also a member of the Royal Society of Literature, the Society of Authors, the Authors' Licensing and Collecting Society and the Federation of Writers Scotland. Over the years he has produced original writing for respected organisations such as the Stirling Smith Art Gallery and Museum and the Dementia Services Development Centre, a leading independent higher education research unit based at the University of Stirling. Additionally, he is regularly involved in public speaking events and has delivered guest lectures and presentations about his work at many locations around the United Kingdom.

Tom holds a PhD in English Studies, on the subject of Scottish Literature, from the University of Stirling. He has also been awarded a first-class Honours degree in Literature and a Master's degree in Humanities, specialising with distinction in British cinema history, from the Open University in Milton Keynes.

For enquiries related to the commissioning of new work from Tom, his literary agent is Professor Robert Lecker of the Robert Lecker Agency in Montreal, Canada.